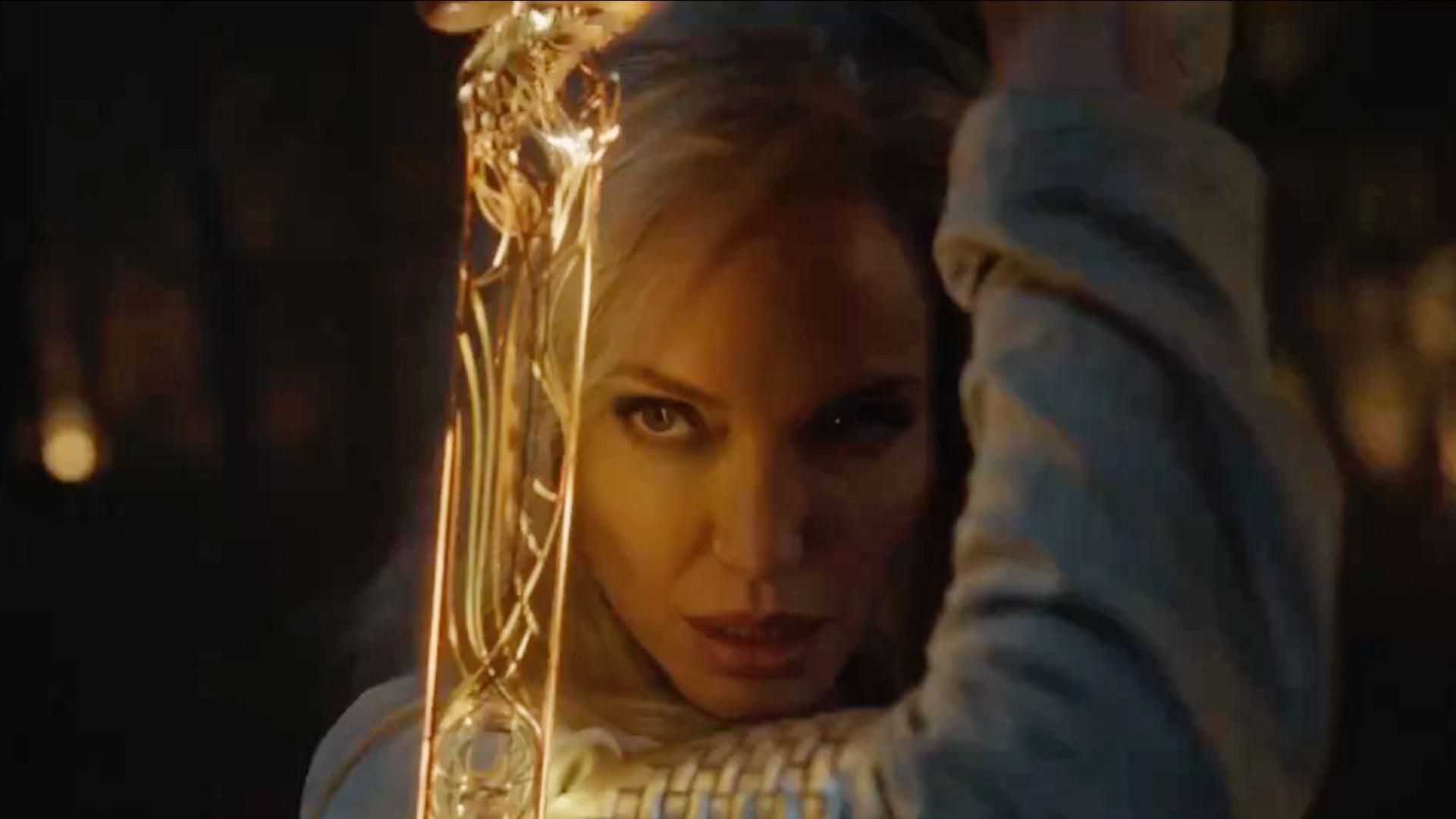 Angelina Jolie is back with Marvel’s Eternals.

After what feels like an eternity of waiting (or should that be eternality), Marvel just dropped the trailer we’ve all been waiting for: Eternals.

Opening up to an eerie backdrop of ‘The End of the World’ by Skeeter Davis, there’s a sense of anticipation and foreboding, before it cuts to a glimmering Jolie in her superhero role as Thena. Already you know, it’s not the usual Marvel.

Lighting up the screen with her luminosity, Angelina Jolie’s blonde hair and gold headband is what we came for. Coupled with a Gaultier-esque bodice and white draped dress, it’s part-trojan warrior, part goddess all rolled into one, and we can’t get enough!

Previously describing the role to E! News as empowering, inspiring and giving her a source of strength, it feels like a new direction for Jolie. Thena, is of course known to possess a number of other-worldly powers, and Jolie gives us a taste of some of these, as she waves her long golden sword – lightsaber-style, with great agility.

Based on The Eternals comic book, the immortals are forced out of the shadows to protect the planet from supernatural threats – The Deviants. Expect explosions, fighting, moody skylines, a touch of romance and a stellar cast from Oscar-winning producer Chloe Zhao (Nomadaland).

As we’ve come to expect from Marvel, the ensemble is diverse and impressive, fusing old and new talent from around the globe. As well as Jolie’s fierce character Thena, the line-up includes Salma Hayek as spiritual leader Ajak, a swoon-worthy Ikaris played by Richard Madden (Robb Stark from Game of Thrones) in his first Hollywood Blockbuster, Gemma Chan as earth-loving Sersi, celestial being Kumail Nanjuani playing Kingo, Don Lee taking on the role as fighter Gilgamesh, Lia McHugh as the eternal youth, and Kit Harington (Jon Snow from Game of Thrones) as Dane Whitman, amongst just some of the stars.

“Throughout the years we have never interfered, until now.” Watch the brand new teaser trailer for Marvel Studios’ “Eternals” and experience it in theaters this November.

What the trailer tells us?

The trailer teases with just enough Jolie to excite us, without giving too much away. And whilst it doesn’t reveal much plot-wise, it does provide a glimpse into her character and what to expect.

We first see her ethereal figure in one of the opening scenes, and later impressively handling the gold-embossed sword. It’s hard not to be struck by Angelina Jolie’s blonde hair as it whips delicately in time with her white gown, giving us all the goodness-feels – we already know she’s a force for good.

In terms of looks, it’s quite the deviation from her usual goth appearance (a la Maleficent), instead channelling her inner glam femme-fatale. Indeed, it appears to tap into another side of Jolie we rarely see – a soft warrior – and it suits her well. She’s made no secret of the turbulent few year’s she’s had in her private life, that this role sees the resurrection of her as a fighter – but of a different kind.

Coming to a screen near you

If you’re ready for your fix of Angelina, the wait is almost over. We know that Marvel Eternals will open up across box offices from 5 November 2021.

If there was any doubt that this new Super Hero movie is going to be a mega-hit, the official trailer saw 13 million fans tune in within its first 24 hours of release. It’s fair to say. Angelina Jolie and her new golden locks are already turning heads.

Stay up to date with all things Marvel via marvel.com/insider.

Get more movie news on SoBinge.com.au.